Steredenn: Binary Stars is a horizontally scrolling spaceship shooter that has a fusion of old school gameplay combined with bullet hell and rogue-like aspects to make it a unique release. Super Rare Games did the physical release, in their own unique limited way. Let’s dig in and see how everything turned out!

About Super Rare Games
The Nintendo Switch is quickly becoming the go to system to collect for and there are now many companies coming out releasing low print editions of digital-only games. One of these companies is Super Rare Games out of Europe. Unlike other companies doing the limited release deal for the Switch, I really like the indie focus that they go with for their selection of game releases. While, as most of you already know, I only collect games and genres that I’m truly interested in, my taste in games is different than others and Super Rare Games releasing the unique mix of titles that they do is performing a great service. Let’s get into the game release!

The Packaging
With the packaging, Steredenn: Binary Stars now has a professionally produced release along the lines of the other Nintendo Switch games. However unlike some of the “Triple A” titles where things are bare bones, we not only have artwork on the inside of the case, but also a “manual”. I use the term manual very loosely as it is literally a folded single pager with the simplistic controls laid out, which is definitely better than nothing. There are also some awesome trading cards that Super Rare Games has made a standard with their game releases. I really feel for all you obsessive collectors out there as there are a ton of little cool pieces out there to hunt down for these game releases!

The other aspect of the packaging that I enjoy is the fact that their spines are consistent with the Switch library and they also add the number of their release on the bottom; which is great if you are going for a full Super Rare Games set. Considering that I’m not a huge fan of a lot of the multitude of expansive collector’s editions out there (there are a few that I will cover in the future that I absolutely love though) I am absolutely draw to the overall product Super Rare Games is putting out and the reasonable price point of around $30 (slightly more when converted from GBP) which shows that they are doing things for the love of the Switch and the games they are representing. 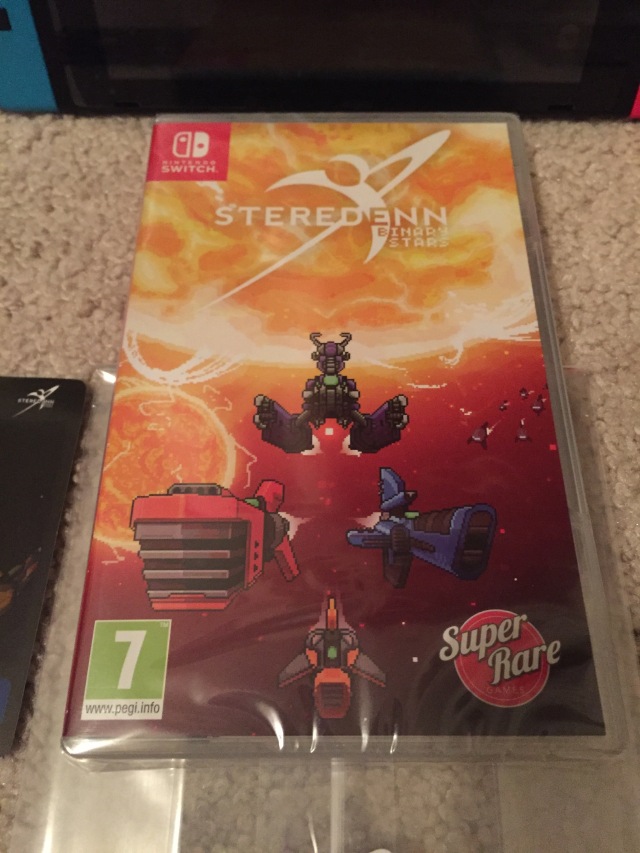 The Game Review
As for playing the game, being a huge fan of horizontal and vertical shoot’em ups, Steredenn: Binary Stars should be right up my “Alley”, pun intended, however there is just something about the procedurally generated levels and enemy placement that feels less like a Caravan shooter and more like a random “rogue-like” game, with little balancing done to even out the power-ups. Call me an old man, but for high score based games, I enjoy learning the patterns of the enemies to offer the opportunity for me to master the levels and ultimately the game. Hunting down and getting that perfect set of power-ups is what makes a good shooter, great and that’s the feeling I’m missing here.

Playing Gradius on a single life is an amazing feeling and knowing exactly where every power-up is going to be allows me to begin to plan out each and every move I will make. With Steredenn, it all feels so random and some runs I’ll make it extremely far with amazing weapon upgrades that feel absolutely perfect and then the next playthrough I’ll get a really basic power-up and can’t even make it past the first boss without major grinding and frustration.  To me that’s pretty off-putting and why I’m typically not a fan of rogue-like games unless they are carefully balanced out.

It’s just so close to being perfect as, getting away from my dislike of the randomness factor, the controls are extremely tight, the visuals are amazing, the soundtrack is excellent and the game mechanics itself are very addicting. That’s the craziest aspect to this is that I absolutely love playing this game… when I get the right set of power-ups. But when I don’t get a good power-up, that whole playthrough ultimately feels like a waste. However, if you like having a ton of variety when it comes level layouts, everything this game has to offer will simply amaze you.

While I admittedly only played this game in the main mode, there are a couple other game modes you can unlock through progression. Adding in some variety to modes would have been nice to have from the onset of playing, however I completely respect having to earn extra things in a game through mastering it.

The Conclusion
Steredenn: Binary Stars is a very solid take on the bullet hell shooter from a horizontal perspective. While I don’t personally like the random nature of the power-up drops that ultimately causes a missed opportunity with each and every playthrough, fans of rogue-likes will enjoy the varied levels. Super Rare Games did a bang up job on this release and to me are gearing up to be one of my favorite smaller publishers for the Switch due to their focus on smaller unknown titles like Steredenn. While this game pretty much sold out immediately, you should definitely see what Super Rare Games has in store for collectors next!