NESmaker is quite possibly one of the coolest things to have been created in the NES homebrew community that I’ve seen. It reminds me of Game Maker on the PC, but it allows you to create games within the specific restrictions of the NES which you can then burn straight to an actual cartridge and play on real hardware!

The question is, will it be everything they say it will be and what impact will it have on the NES homebrew scene? It’s time to dig in and talk about this crazy program and device that will let us create brand new NES games with no coding experience required… 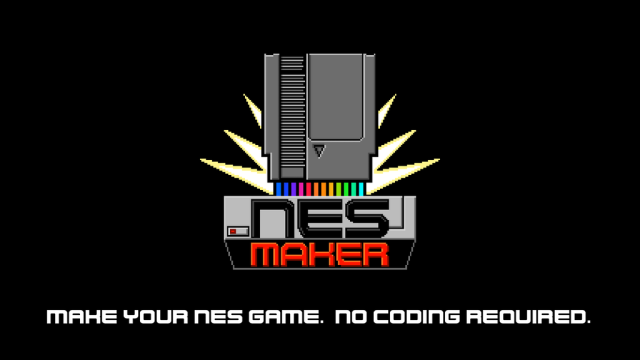 Let’s start off with what we know it can do. NESmaker is an easy to use, yet extremely complex, interactive Windows program (they will possibly work on ports to MAC and Linux later). Everything is visually available within the program making it kind of like Photoshop for NES games.

You will basically be able to create a decently complex 8-bit Nintendo game within the program that will run on actual hardware. You create the graphics, backgrounds, menus, stories, characters, items and more in a set “module” that the program provides.

The “Adventure” module is actually already a thing! The program that is now being called NESmaker was actually created to help Joe Granato with the creation of his upcoming NES homebrew Action RPG Mystic Searches. Basically Joe knew an amazingly talented engineer and had the program created to help him with the creation of the Mystic Searches world after setting up all the parameters that he wanted.

So this initial module will essentially allow you to create an overhead adventure game like “The Legend of Zelda”, however what is interesting to me is that even this base module can be manipulated to allow you to do tons of different things with it, such as create a brawler or even a platformer within that single engine. But, we don’t have to worry about this as other modules have also now been unlocked!

The other modules are for Platformer, RPG, Brawler and Shooter games, which all will have been unlocked as stretch goals by the time this project has been funded. I have to assume they will all operate very similarly to this first module, just with slight variations on the play mechanics to make it “feel” like that genre. I hope that each one is a bit more complex and actually allows for the specific nuances that makes each genre unique. So this recommendation actually goes with one of the limitations that will present itself and who the actual market is for NESmaker. 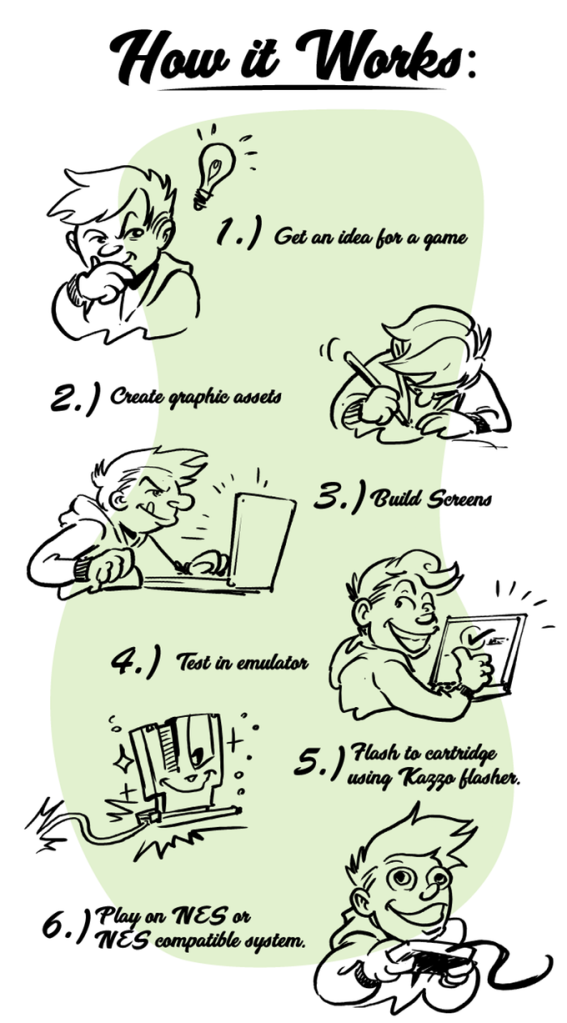 Basically the main limitation of NESmaker will be that you can only create what is available within the program itself. If you are a NES programmer with tons of knowledge on the system, you might actually find this program quite limiting, as you will essentially be limited within the constraints of the program that has been created. Fortunately there will be the opportunity to manually edit the code, but that will be pretty much like reverse engineering a NES game which is another beast in and of itself.

However, if you are like me and a passionate hobbyist that has always wanted to create a NES game from the ground up, but the nuances of assembly coding is way too overwhelming (which I think is a majority of us), NESmaker is absolutely perfect!

With the program also comes the Mapper and board limitations. The games will essentially allow for flash saving and use a unique mapper to do this, which is currently only available from a couple of individuals (InfiniteNESLives and RetroUSB off the top of my head) and are not the most affordable boards available for the NES. That means that if you want to actually distribute your NES game it will cost quite a bit (think board costs, plus cartridge, label, sleeve, then Box, manual, styro if you are going CIB).

If you recall I released Jeffrey Wittenhagen’s Black Box Challenge, which also used this Mapper and it’s not something you can just buy and create 100 copies to sell later (unless you have thousands sitting around that is…). So it’s going to be tougher than just going to AliExpress and getting a bunch of simple NES homebrew games made with a cheaper board. This also has to do with the complexity of the game too, as something large doesn’t fit on the standard boards anyhow. So it’s basically a limitation that is due to the nature of how it is being created, I just wanted to highlight that it is definitely something to be aware of.

The other aspect that could be considered a limitation is a major aspect of what makes NES games great and that is the music. While I think it will be possible (I don’t know if it will be easy or not) to import a created song from a program like Famitracker with the correct specifications to NESmaker, it’s not something that’s as simple as the other aspects of the program.

There is a stretch goal for “Music Maker”, which I assume will be funded at the rate things are going, however we don’t know how intuitive it will be. The other aspect is that we don’t know how this extra program feature will be released, and while I did opt to upgrade my pledge to be a beta tester as early as possible, the final product will likely be many months away.

That’s because of what I like to call “The Granato Effect”, which is a name that I think the creator will enjoy! That leads into my next topic that I have to bring up… 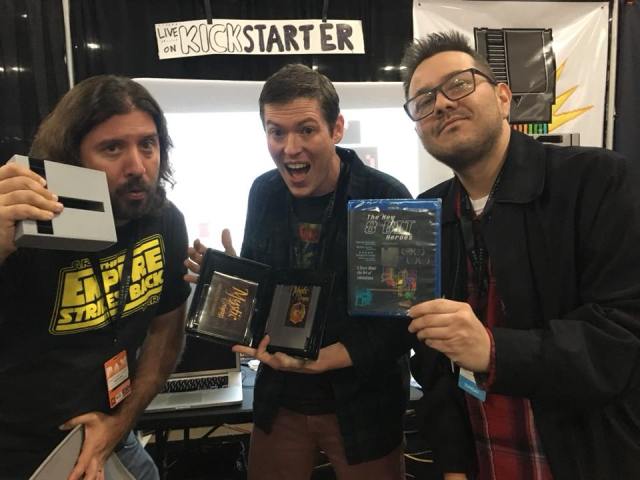 It’s time to get a bit real with things (as you all know I will go over all aspects) and talk about possible concerns with the project. While they are not major to me, I do think they need to be highlighted as people have mentioned it to me.

I’ve known the creators, Joe Granato and Austin McKinley for a few years now and this isn’t the first Kickstarter they have launched and has been successfully funded (yes I’m predicting the future here). Some of you know about the documentary of NES game creation “The New 8-Bit Heroes” and I already mentioned the NES homebrew game “Mystic Searches”. Where “The Granato Effect” comes to play is right here, as Joe is a true visionary but there is only so much time in the day. The older Kickstarter for both the game and documentary were funded in October of 2014 so we are going on over 3 years now and neither the film nor the game have shipped to backers. Be aware that Joe and Austin have been updating backers like madmen and treating each aspect of their projects as seriously as possible; hitting things out of the park, however have they possibly left some of their “non-interactive” backers in the dust as things continue to grow larger?

The film has been completed for over a year now and they have screened it across the country at many conventions (which I personally was able to see it twice at Emerald Coast Con and PRGE in 2016). They have also made it available on Amazon Prime to view for a price, however original backers still do not have access to see the video, nor have they had their physical copies mailed out (although they are selling the blurays at conventions or maybe giving them to backers they meet in person?). While this doesn’t bother me, as I am also a content creator and I completely understand how projects go (especially ones with multiple items and the ridiculous shipping rates), I have had multiple people ask me my opinion on it. I’m sure Joe and Austin have a plan to give back to the people who helped them get this film off the ground while they also wait for the game… maybe an Amazon Prime code or something to the people who helped make it happen?

The NES game is where Joe’s own imagination has been getting the best of him for sure, as he has upgraded the scope multiple times beyond his own initial concept, which definitely looks amazing. He has even offered up a prequel of sorts to help tide people over as he continues to raise the bar on himself. To me Mystic Searches has the chance to be as good, if not better, than the original classic NES games, but that takes time.

The question to think about, is there enough time in the day for him to put the finishing touches on the NES game as well as get NESmaker out there? I think he can do it, however it’s definitely going to be challenging (especially with attending the multiple conventions and events to promote things while he’s at it). While some people may have preferred that he finish his NES game prior to launching another complex initiative, knowing that NESmaker is already in a beta testing stage means that he could literally let the engineer go nuts with the new modules while finishing up Mystic Searches for the masses… while beta testers go nuts messing around with the program. (at least that’s how my mind goes!) 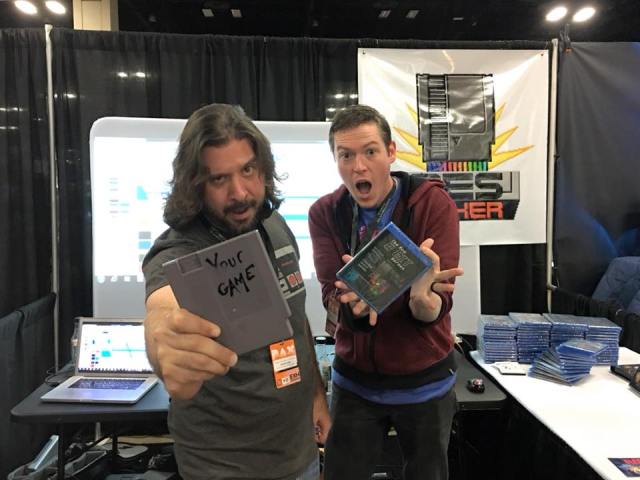 The bottom line from me is that Joe and Austin have seriously been balls to the wall with their projects, and people need to realize that it’s really just a couple of passionate dudes creating some amazing stuff! As long as we are all patient, they will no doubt hit every aspect out of the park. NESmaker is just the next thing in the line of amazing and innovative initiatives that they are creating.

What’s truly exciting for me as a NES Homebrew aficionado is that we will now be getting tons of brand new Nintendo games to play on our systems in a physical form. Hopefully so many amazing games that we won’t be able to keep up! It will change the landscape of making games on the original 8-bit NES.

Plus I will be able to create my own sequel to Jeffrey Wittenhagen’s Black Box Challenge and go crazy with it. What genre should it be? Maybe it’s time to collect the entire library in the RPG module or even an Action RPG-style game with parodies from weird NES games thrown in? Jeffrey Wittenhagen’s NES Oddities has a nice ring to it….

You can check out NESmaker via their Kickstarter Campaign Link (which should have a link to purchase it if you check out this article after the campaign has ended too!)