Newer web series nostalgia is the name of the game with Eskimo Bob, which was funded on Kickstarter in June of 2017. In terms of NES Homebrew releases, I don’t think we’ve gotten a game based on a newer licensed property. Fortunately it doesn’t follow suite of all the poorly-created licensed games from the heyday of the NES and is solidly designed. 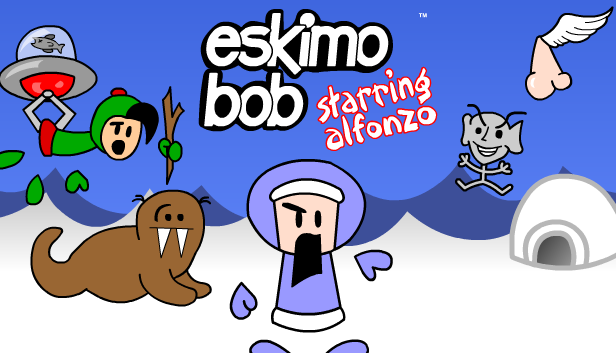 Eskimo Bob was a flash cartoon that was on Newgrounds in the early 2000s. I have to be honest, I didn’t know much about the web series prior to backing this on Kickstarter so I don’t get any of the references that are in the game. However, for a NES game it is quite solid and it was shipped to backers extremely fast after the Kickstarter was funded, which is impressive. 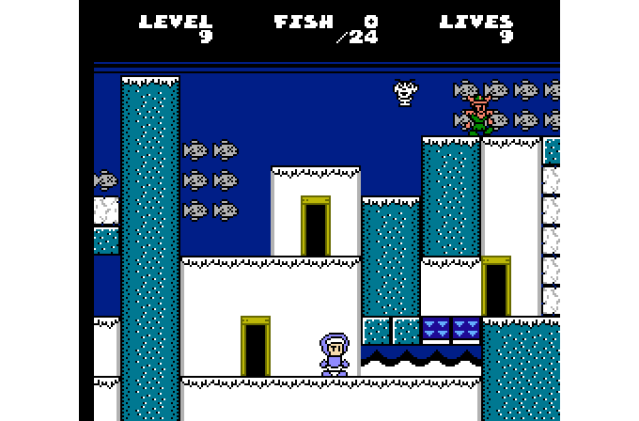 From screenshots Eskimo Bob may look like a platforming game, however it is more of a puzzle platformer with the main goal of collecting fish in order to complete each level. You switch between two characters, who each have different abilities, which is essential to completing levels. 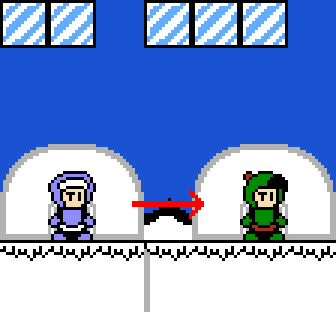 The puzzles are very basic, especially if you are familiar with platforming games, however this ease-of-play makes the game very rewarding and something that I just wanted to keep playing. As you progress there are many different enemies, which require different strategies.

The graphics are very colorful and look like the cartoon that the game is based on. The music is upbeat and well done, albeit very repetitive. You’ll be hearing the same tunes over and over again as you complete all of the level puzzles. The controls were extremely well and at no time did I find myself getting frustrated with something other than my own lack of skills. I did only test this in the Sharp NES TV, so I cannot comment on if there is any lag with clone systems or HD systems like the AVS, but it plays beautifully on real hardware. 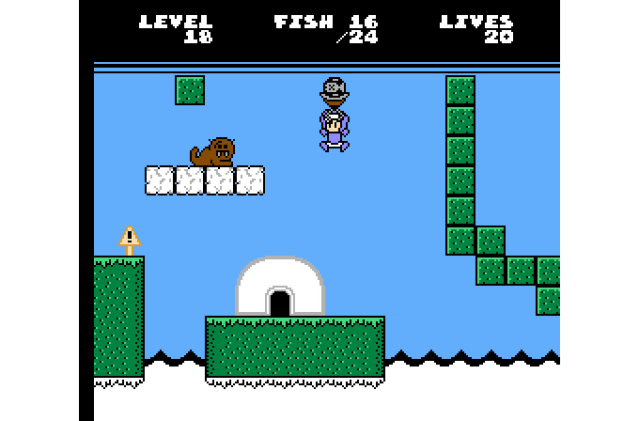 Eskimo Bob is a very solid NES game and on par with puzzle games like Kickle Cubicle and the Adventures of Lolo. The excellent controls, combined with solid visuals and immersive, yet simplistic, gameplay makes this game one that NES players will want to have in their collection.

At the time of me writing this, you can get your own copy of Eskimo Bob at:
https://www.spoonybard.ca/product/eskimo-bob-nes-game-boxed