Hacking the NES Classic – How does it hold up?

As some of you “Hagen’s Alley Originals” know, I have an amazing Coinops-Hacked Xbox that runs everything, near flawlessly. That being said, I figured I would chime in with my thoughts on the NES Classic and its true potential.

The prospect of the NES Classic was novel and something that was really cool to allow casual gamers the ability to relive some of their NES nostalgia in a simplistic and streamlined way. However, due to the rampant nature of resellers taking advantage of low stock from Nintendo, we have yet to see the NES Classic reach that potential. Then the hackers got a hold of it…

A talented group of coders took it upon themselves to not only hack the NES Classic, but create a very straightforward and easy to use front end, called Hakchi. This GUI is basically a menu assisted guide to help you modify your NES Classic to be able to add more games to it. This first version of the hack allowed you to add about 60-80 games, however the hackers weren’t done and when Hakchi 2 was released you could now add the entire NES library, Famicom games, Fan Translations, Hacks, Homebrews and even some Famicom Disk System games! The only limitation was with some unsupported mappers. However the hackers were still not done…

Not satisfied with just having the entire NES library, they attempted to add the ability to add other systems. This was initially done via a “RetroArch channel” and wasn’t very user friendly, as the other hack had been. Fast forward to the latest update (as of this writing) and now you can add in a variety of games that all play with the streamlined menu interface, which you can now add in custom music as well. It is surreal how well this works, however it’s not all flowers and puppy dogs as it does use emulators and as well all know non-optimized emulators have their issues. Let’s go at this system by system and see my thoughts on them, shall we?

NES (Now supporting more mappers) – The original NES still works the same as it does, however there is now support for every mapper! These are ran with a different emulator on the system, however it seems to function pretty much the same as the original. I’m sure that there is some incompatibility, however I couldn’t find any with the games I tested.

SNES – Yes, the SNES not only works, but it runs pretty flawlessly. This is a huge deal as the Super Nintendo is a huge fan favorite system. Be aware that in order to utilize the extra buttons, which includes any system that needs them, you need to use a Wii Classic Controller, or Smash Bros Gamecube Controller; the other third party controllers I tried didn’t work. My main gripe, and that could just be simply due to the way the games were created, Donkey Kong Country looks really bad and Mortal Kombat II also looks very dated. However Chrono Trigger, Super Punch-Out and even Uniracers looks good. I am sitting really close to the TV and the image is huge so that could be part of it, however I also think that the emulator is currently not optimized to fully render the games clearly.

Genesis – The Sega Genesis is supported on the NES, which is crazy to think about if you grew up in the 16-Bit era! The games run great and look surprisingly good. I checked out Toe Jam & Earl, Splatterhouse 2 and Sonic Mega Mix, which is an extensive fan hack, which all worked flawlessly. However, you need to be aware that using older .BIN ROMs will not work and you need .MD versions. No real complaints from the Genesis department, however I did test 32X games to no avail.

SMS – The Master System works great and I tested Golden Axe Warrior on it. The screen did seem a bit cut off and I didn’t see anywhere to adjust this. Still another flawlessly running console to add to the mix. I have not tested Game Gear yet, but the site does not list them as compatible either.

Game Boy and Game Boy Color – Both of these work great, although they do seem to have the same screen cut off issues as the SMS. Everything else seems to be working flawlessly and it will be exciting to play some of the bucketlist games in HD.

GBA – Now the consoles that don’t hold up too well currently. The Game Boy Advance isn’t working too great with the NES Classic at this time. The music is barely working and the games run really choppy. Hopefully this is fixed in future updates. As of now, I’m avoiding these games.

N64 – It is a novel idea that the N64 would be supported on the NES Classic, and as I expected it doesn’t run well. I tried WWF No Mercy, and while I could get into a match, it was really slow and not enjoyable. Blast Corps, which is one I always test on emulators, didn’t get past the intro screen. This is another system I’m avoiding until it is optimized. 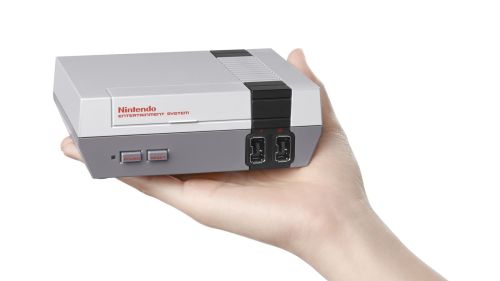 Final Thoughts – While it’s not perfect, it is mind blowing that they were able to add as much as they have already to the NES Classic! I really like the slick front end and the plug and play aspect makes things very approachable to gamers of any caliber. The initial RetroArch app within the menu was a turn off but now being able to launch games directly is amazing. So what am I using the NES Classic for if I already have the original systems with Everdrives and CoinOps?

The simple image above makes this system easily accessible on our main TV in the house and in HD. Of course not every system is perfectly optimized, but it’s very tolerable to say the least.

I’m actually going to be using my NES Classic in two different ways. First off, I’m going to load it up with a few games that have been on my bucket list to complete, add in games that are easy for my daughter to play, along with my wife’s favorite games of all time. This will make it a device that is easy to power on and play in quick stints and won’t be overloaded with tons of games to sift through.

Secondly, I’m going to utilize it as a way to show off Homebrew games when I go to conventions; which I will remove all the non-homebrew games when I do this. Since it is easy to plug ‘n play into any TV, it would be much easier to bring the NES Classic with me to conventions and show off brand new Homebrew games people are creating, instead of bring my AVS along with all the cartridges. Adding in more systems, means that I’m not just limited to just the NES anymore either, which is exciting!

In conclusion, the NES Classic is an amazing little machine that is very accessible to everyone; including casual fans. While there are things out there like the RetroPi, they are definitely NOT for people who do not enjoy constantly tinkering with their machines to the point where it becoming a constant project. This is the exact same way to some degree that the Xbox CoinOps is, so the NES Classic actually has a leg up on both of these! The slick interface and ability to easily hack this machine with a simple GUI program to add in a variety of systems makes this a killer app and something that all gamer’s should have in their collection. Hopefully new updates keep coming out and this will continue to evolve into the perfect retro gaming machine!