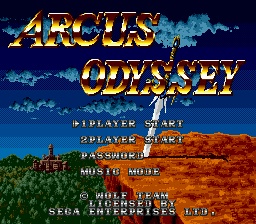 Very rarely does a game wow me from the intro/title screen, but Arcus Odyssey has a killer one! The music really puts you in the mood to slay some baddies. On the title screen there is a 2 player option which is a nice little touch and something I might have to come back to in the future. Once you start you have 4 characters to choose from, I went with the sword wielder. There was, however, a guy with a flail that looked like Simon Belmont from Castlevania Chronicles which I’d also like to try out some time.

Upon playing the game it seems more like Gauntlet than Zelda, but with a more manageable amount of enemies on the screen at once. Your weapon is more of a shot than a sword swing which gives it more range and also brought upon the Gauntlet analogy. The view is more isometric than top down that can be difficult for a normal d-pad. Fortunately, I am playing this on Coinops so I have an analog stick that brings about a huge upgrade for controls. You also are given a life bar with a limited, but seemingly sufficient, amount of hits. 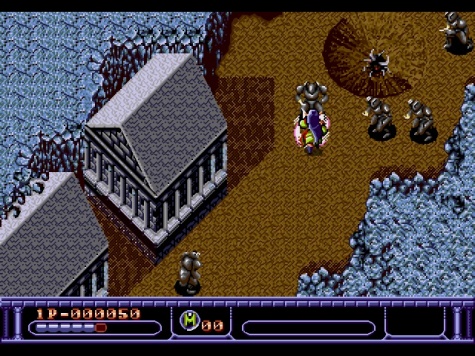 I initially went after this game as a run ‘n gun instead of at a slow pace. That was definitely the wrong mentality as this is an extremely long game with tons of content. For my play through there was a smaller sized boss at the end of the first level. This room was hidden behind a waterfall and once I entered I couldn’t exit to hunt for more items. Because this is an action rpg, hidden rooms you cannot exit is definitely something to be weary about because you could definitely be underpowered if you accidentally progress unknowingly too many times.

After beating the stage boss I was given a power up, that increased my life, and progressed to the next level; which was preceded by a password to save my progression. In the second level, I found a jail cell of sorts and there were people tied up that talked to me. This is a nice little touch that definitely breathed life into the bleak world you are thrust into. After that I found a ton of items and finally met my demise by a horde of enemies while figuring out the block mechanic you can do by holding down the attack button. A bonus is that they give you the option to continue from the level you left off on so you can continually make progress in the game. Combine that with a decent password system and Arcus Odyssey has a ton of things going for it.

– Single Credit Synopsis –
Overall, Arcus Odyssey is an amazing game that is only held back by its isometric view. Fortunately, that is something that can be learned through repetition and it has a very forgiving continue and password system to help with progression. The music in Arcus Odyssey is truly amazing and really adds to the overall world, giving the game an epic feeling. I will definitely be coming back to this game in the future and hopefully next time I can see more of this bleak world.