Beerslinger is a homebrew NES game released in 2015 by GreetingCarts, who also made the homebrew game Blow ‘Em Out released in 2014. This time the holiday is Saint Patty’s Day and what better way to celebrate than slinging some beer? You control the bartender at the most popular pub in town where you need to avoid messing up the customer’s beer order and getting fired. Think of it as a top down version of Tapper for your Nintendo Entertainment System.

The game starts out simple enough with a couple of beer types and customer seats. Each customer calls out their beer with a voice sample, which is a nice touch. There is also a nice little catchy tune that loops while you play which adds to the experience. Once you get someone their beer, they move out and another person takes their place. Eventually, you hit the monetary goal and the day ends, moving you on to the next day, with more beer types and customers. If you grab the wrong beer, you can press the A button to drop it and get the correct one, although I didn’t have to do that once during my playthrough.

Ironically, Beerslinger only starts to really get hectic around day 6 and 7 near the end of the shift, right when the game ends. After you finish the week, the bar owner says to rest up in order to prepare for your next challenge, which I assumed meant the game was going to continue marathon style to the next week. However, the end screen only looped with no continuation! Did I really just beat a NES game first time playing it with no mistakes? This is the first time this has ever happened to me with a game and I am shocked. It could just be that I’m that good at NES games, however I think it is more on the line of this game is way too easy and should likely continue on forever, arcade style.

If you are trying to find a copy of the game, Beerslinger was unfortunately released through the NintendoAge forums, and via Facebook, in a limited amount of 100 physical copies. This is a common practice for NES homebrew game developers as the collector community is pretty niche and they want to avoid making a ton of games if they do not sell. If you are interested in a non-limited version, GreetingCarts has an Etsy page where they will eventually put it up for sale as they have for Blow ‘Em Out.

– Single Credit Synopsis –
Overall, Beerslinger is an amazing concept that only falls short due to ending way to early. Due to this being a brand new homebrew game, the creator really needs to create a tournament edition that continues infinitely, incrementally increasing the money required each day until the player loses; keeping a score at the end based on the day you got to and how much money you ended with. This would open the door for competition, high scores and replayability. I will likely never open my copy up again due to it being way too easy and the limited edition. So much potential squandered on such an amazing concept. With just a little tweaking, this could be a NES arcade classic! 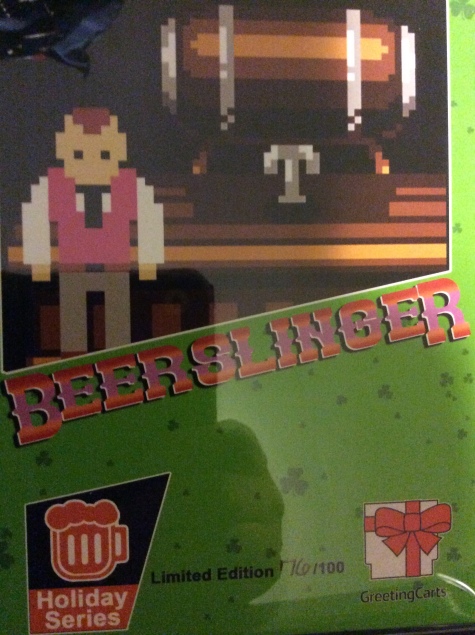