Twin Galaxies – Set up for Failure Right from the Start?

Twin Galaxies used to be the standard bearer for all video game world records, the kings of the competitive gaming scene. How it went was you could set a new gaming record by competing live in front of an official referee or by submitting a video tape. There were rules and regulations specific to certain games that were put in place to essentially avoid cheating. The old system was archaic and needed to evolve, however, even though it wasn’t the most efficient system, it worked and the records were universally regarded as the standard.

Then Twin Galaxies was sold off. The first group decided to keep the old system in place, but focused more on live events. With submissions, however, they decided to charge a fee. This caused an uproar by the community due to the old system never charging for submissions.

After a short while Twin Galaxies was then purchased by Jace Hall, founder of Monolith Productions Inc. In his first public posting he talked about a new community submission system that would allow online submissions that are voted on by members. Many members of the competitive gaming community were skeptical, due to the lack of judging expertise from the typical gamer.

Fast forward to January 2015 and submissions had finally opened on the website. I decided to test out the process by submitting a previously approved record I had recorded that wasn’t in the database, due to the original website not adding it when the company was sold. This record was for the diving event in the Commodore 64 game Summer Games. I have since broken this recorded record, but since I am in the process of moving across the country my Commodore is packed up.

I transferred the record from the old VHS tape submission to my computer and converted it to the proper format for submission. I uploaded the video to YouTube and also attached it to the forum submission, as per the guidelines. This entire process took multiple hours and was frustrating due to having to change the video format of the old file to meet the website requirements. Then I submitted the record for approval and the madness began.

The first post in my submission was from former Twin Galaxies chief referee Robert T Mruczek who said it looked good. I assumed that my record was good if a professional, such as Robert, blessed off on it. How wrong I would be with this thinking.

The only actual former referee approved my record

After that post came the armchair wardens who then requested a bunch of things that they wanted for a submission in order to set a good standard for future submissions. The irony is that as the posts went on the Twin Galaxies admin account stated in my submission thread that all these requirements from members based on how it would look in the future are irrelevant and the submission should be judged on its own merit and not on how future submissions should look.

The Admin Backed Me Up

It’s like they wanted me to jump through hoops because they were unfamiliar with the Commodore 64 system and the game I was submitting. It is sad because these requirements were coming about for a record that was seconds long and had never had an official hardware submission before. Looking at other submissions on the forum around the same time showed that records have been accepted without all the requirements requested in my thread and some even based on just knowing a person! For example, one NES record was approved that just showed the gameplay and players head. In my thread they wanted me to show the entire 15-30 minute Commodore 64 boot up series along with having the full computer in the shot and increasing the quality while not having the black scrolling bar, which is synonymous with recording from the original Commodore monitor if they knew anything about the system. The NES record, shown as an example below, did not have the console in the shot so there is definitely a double standard in place. I did not have an issue with that record not showing the console and voted accepted on the record as I know Life Force on the NES very well. 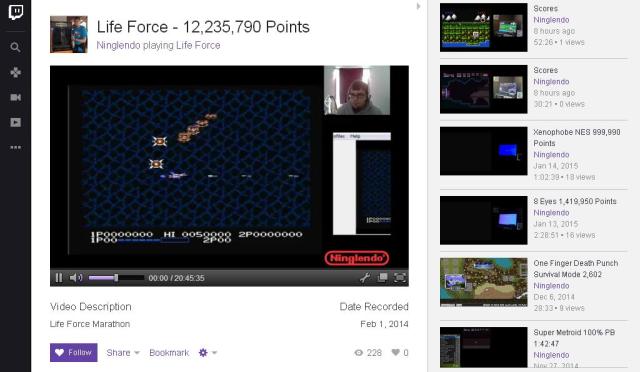 Doesn’t show a system in the video, yet was Accepted.

One member suggested that they want to make sure there are no cheating devices attached to the system. I did not know anything about a device like that, so I did a little research. A simple google search shows that there are no cheat codes for Summer Games on the Action Replay, which is a rare and expensive device for the Commodore. So even if I had the device, which I don’t, there would be no way for me to cheat on this game. This only adds to the fact that there needs to be some kind of expert factor implemented to avoid unneeded requirements and subdue irrelevant, blatantly slanderous comments from members who do not have the expertise on the games they are passing judgement on.

On the right is the setup when I recorded the Record

The current submission system is inefficient at best. If the community members don’t like someone, they have the option to vote it down, not allowing that person to ever obtain a record. The simple fact that cliques have already surfaced less than a month into submissions means it will only get worse as time goes on. In my situation, members didn’t like the fact that I was explaining and defending myself in my submission thread, which I felt was necessary due to the double standards that were being requested.

There absolutely needs to be a dozen or so expert referees that can go to each submission, view the video, comments and evidence to make a professional decision. How can a website, that strives to work with Guinness World Records, rely on any mouth breather that can simply sign up for an account to pass judgement on records that are approved or denied within the entire system? The fact that people with actual knowledge on the system and game said my record was good, the Twin Galaxies Admin account supported me and it was still voted down, due to members not liking the style of submission, likely me defending myself and explaining the submission, shows the inherent flaw in the current submission system.

Jace Hall and the admin staff at Twin Galaxies really do seem to want what’s best for the community, however for this website to be taken serious by the greater competitive gaming community, I feel a small change needs to be implemented. Basically, there needs to be official referees who garner accounts that have veto authority when the community decides to unjustly vote down someone like a vicious mob. I do not mean go back to the old ways, but simply implement moderators that have extra privileges. That way if something happens where the expectations are irrelevant and unmerited, the moderators have the ability to over rule the community. As the late, great Ronnie James Dio used to say, “If you listen to fools, the mob rules.”

Link to the Forum Thread

7 Responses to Twin Galaxies – Set up for Failure Right from the Start?